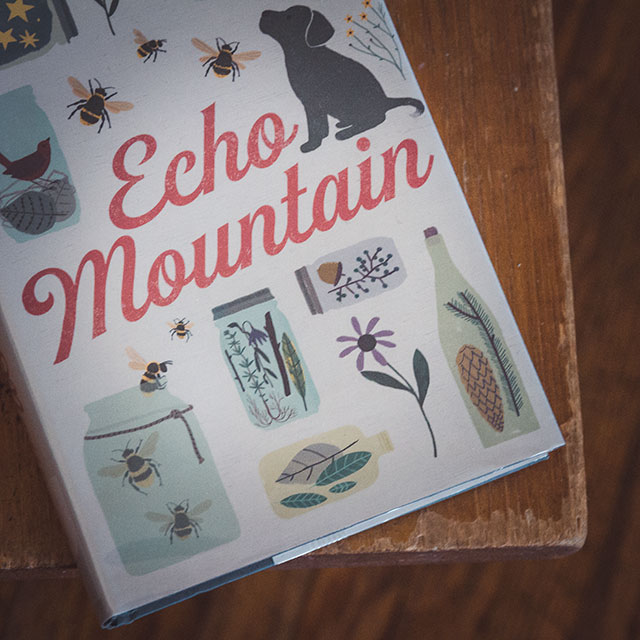 Basic plot: Ellie and her family have come to live on Echo Mountain during the Great Depression. When her father is put into a coma after being struck by a tree, Ellie is determined to wake him up. She ends up finding the hag who lives at the top of the mountain, only to discover that the mysterious woman is facing her own medical emergency. Ellie seeks ways to help the hag with hopes that she might in turn help her father as well.

Opening lines from the book …
The first person I saved was a dog.

1) The Great Depression has always fascinated me. This book isn’t quite your typical middle-grade book set during the Depression. Rather it’s also a survival story of sorts where the town family must learn to live off the land on the mountain, including dealing with life-threatening medical emergencies.

2) I enjoyed Ellie’s growing relationship with the mysterious “hag”, Miss Cate. I have always been fascinated by natural medicine/remedies. And this is a great part of the book, especially with Miss Cate teaching Ellie about the use of maggots and honey and even vinegar! (I am glad I didn’t need to “see” the injuries talked about in the book!)

3) There are some nice little twists and connections between the various characters in the book. This is especially true with Larkin, Miss Cate, and the dog Captan. I don’t want to spoil anything, so I won’t say any more about that right now.

4) I like the arc of the mother. At first, she is not on Ellie’s side. As she deals with being the only parent (since her husband is in a coma), she does her best as the mother of three children. Ellie causes her quite a bit of grief when she wanders all over the mountain. But as the book progresses, the mother at least tries to understand the daughter that has so embraced the mountain life.

5) I love the little brother Samuel! (The sister, Esther, is harder to like.) But, it’s nice to see Ellie interact with her brother’s endless questions. And of course, there’s Quiet, the dog. I love it when Samuel and Quiet start to bond. (And to be truthful, I was more interested in the relationship between Quiet and Samuel than Quiet and Ellie.)

THINGS THAT BOTHERED ME…

1) It was a little bit of a slow start for me. Just take that into account. I’d say that about half-way through, I became more interested in finding out how the book will turn out.

If you love a good survival/pioneer type story, this book is for you. Ellie takes to life on Echo Mountain like a fish to water. And it’s part of the fun of the book to see her find solutions in nature.

**Note: I received a free copy of this title from the people at NetGalley in exchange for an honest review.**

My Thoughts: What an interesting read! I found this book fascinating. The subtitle is: Growing Up Hearing with Deaf Parents. And that’s pretty much the book in a nutshell. The story takes place in Brooklyn in the 1930s and 40s.

This is not your typical middle-grade read, however. The book is not plot-driven and is episodic in nature. Basically, it’s a slice of life. One of my favourite scenes was when he teaches his classmates how to sign.

I personally really enjoyed this book; not sure how kids will take it, though. I would probably recommend it for older kids who are interested in memoir, and also the subject of deafness and what it means to be deaf.

Basic plot: A prequel of sorts to Turtle in Paradise. Beans and his gang live in Key West. They have all sorts of plans to make a little cash (Hey! It’s the Depression)… including some shady dealings. That’s when some government men arrive to turn the place into a resort.

1) I enjoyed returning to some fun characters. Beans is a great narrator. I love his antics and his voice. And how can you not love his diaper gang?

2) Love the setting. And the historical back-drop of Key West being turned into a tourist destination during the 1930s… this was new information to me. And I always like to read about things I don’t already know in history.

1) I’m not sure why this bothered me, but I didn’t like how Mr. Stone kept calling Beans “Peas”. And Beans corrects him everytime, but he still doesn’t get it. I think it comes across as a little too gimicky on the author’s part. Like she was trying too hard??

2) Dropping Ernest Hemingway’s name was a little too obvious. I feel maybe Beans would have referred to him as “Mr. Hemingway”.

My rating is 3 Stars (out of 5) – After reading Turtle in Paradise a few years back, I enjoyed coming back to Key West to hang out with the gang. 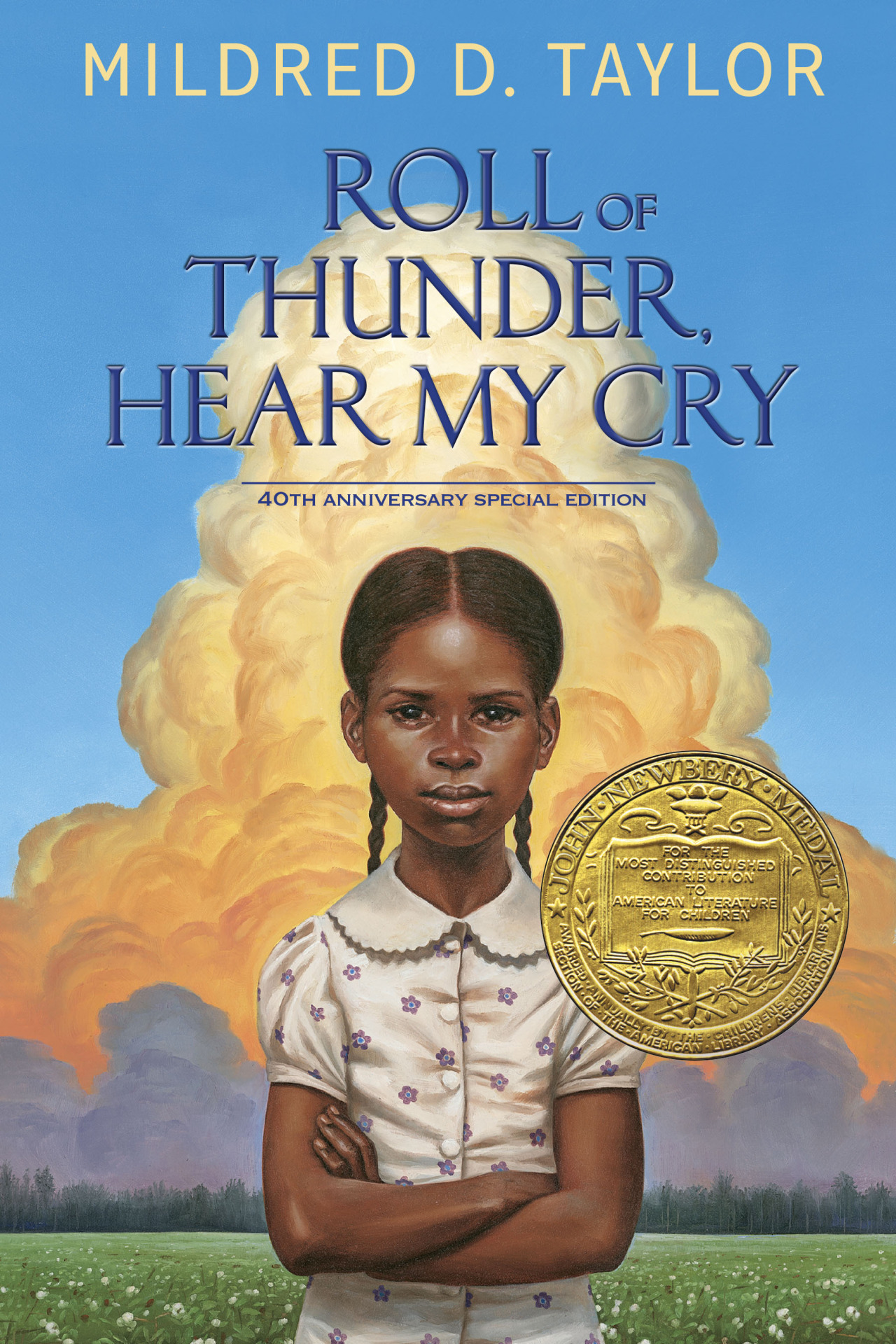 Basic plot: The Logan family must deal with the ugliness of prejudice in their Mississippi hometown during the height of the Great Depression. They are the only black family to own their land, and there are plenty of people who aren’t happy about that. But the family is determined to stick together to keep the land and persevere.

1) Cassie is a wonderful narrator. She’s such a spunky character! (Although, in many ways, I see this book really as the story of her brother, Stacey.)

2) Which brings me to Stacey… What an insightful character. You can see him struggle to grasp the world around him. I love how he takes the blame for T.J. during the cheating episode. Although, he’s not all goody-two-shoes about it. He exacts his revenge (but learns a HUGE lesson in all of that).

3) And then there’s Jeremy. He’s really the only good white character in the book. I love how he stands up against the bigotry of his own father. I love the scene where Stacey’s own father warns Stacey about Jeremy and how he will one day turn on Stacey. Somehow I (and I think Stacey felt it as well) think that Stacey’s father is wrong on this one… that Jeremy would not fulfill this prophecy. I think Jeremy is different. And I think Stacey knew it.

4) But, wait! There’s more characters to love. I just love the whole Logan family. From Big Ma down to Little Man. (Why is Little Man called “Little Man”? Doesn’t matter. It works.) Papa. Mama. Even Mr. Morrison, who is not really a family member, but is living with them.

5) I love how Uncle Hammer [*SPOILER] gives up his beloved car for the family. It’s horrible that he has to do it, but it such a wonder portrayal of sacrifice on his part. [*END SPOILER] He does it for the family.

6) Oh, T.J.! This character wanted to make me cry. In so many ways, he is so despicable. Especially with what happens to Mrs. Logan. And while I hated this character, Taylor was able to make me also feel extreme pity for him. Yes, by the end of the book, I wanted to reach out to him and help him to get back on the road to redemption.

7) [*SPOILER] The fire at the end of the book was a great climax. Even better is the discovery of how the fire was set. However, even though this is a spoiler, I will not make this into a super-spoiler by revealing the answer to that question. [*END SPOILER]

8) And finally… The poem (referenced in the title of the book) is amazing. It makes me want to cry and fume and change the world all in one.

My rating is 5 stars (out of 5) – I can’t believe I haven’t read this book before now. It’s been on my list for awhile. It’s a wonderful, but sad, look into the past. And as history has a tendency to do, we see glimpses of our present world. A world that could use a whole lot more kindness. Thank-you Mildred D. Taylor for giving us this book!

"Four!" / Theme: Focal Point⁠
The newest mug in the cupboard, a gift from a friend. ⁠
I'm going to be doing something a little different with my Weekly Photo Challenge.⁠
"I wonder what it would be like to live in a world where it was always June." ⁠
The roses have bloomed!
Zoe receives a letter from her father, a man she's never met because he's been in prison since before she was born. Is it possible that he's really innocent?⁠
"Into the Lake" / Theme: Follow Me⁠
Mmm. Teatime.⁠
Posting my review of this beautiful picture book.⁠ 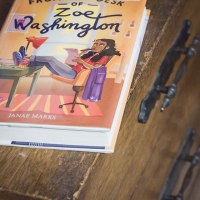 I review books! As a writer myself, I also like to support authors with book reviews. To request a book review from me... please, fill out this form.
Follow Of Maria Antonia on WordPress.com
Loading Comments...
Comment
×