#1 – Sammy Keyes and the Kiss Goodbye (by Wendelin Van Draanen)
The final book in the Sammy Keyes series. A satisfactory ending. Interesting how the author has to change the voice of the narration for this one.

#2 – A Night Divided (by Jennifer A. Nielsen)
A story about the building of the Berlin Wall and how families were separated by the sudden and unexpected happening. Very interesting.

#3 – Cranford (by Elizabeth Gaskell)
After seeing North and South (the movie), I wanted to read the book. My library doesn’t have the book. But they had Cranford, which has a wonderful cast of characters.

#5 – Dear Mr. Knightley (by Katherine Reay)
So, apparently, this is based on Daddy-Long-Legs by Jean Webster (which I haven’t read.) The only thing that is sort of odd is how it ends. The book is told through letters, so it gets a little odd when they finally meet.

#6 – Paper Things (by Jennifer Richard Jacobson)
About a brother and sister trying to stay together, but are essentially homeless.

#7 – How to Steal a Dog (by Barbara O’Connor)
I loved the voice of the narrator on this one.

#8 – Blood Red Snow White (by Marcus Sedgwick)
Some of my favourite books are Arthur Ransome’s Swallows and Amazons books. This book tells the story behind why Ransome started to write those books in the first place. Set in Russia on the eve of the Revolution. (Which is pretty far from the Lake District in England!)

#9 – When Life Gives You O.J. (by Erica S. Pearl)
She wants a dog. But her grandpa gives her an Orange Juice bottle.

#10 – Jingle (by Gordon Korman)
The fun, new installment of the Swindle series. This time with a Christmas theme. 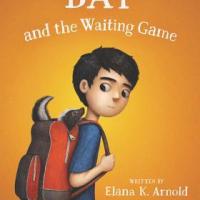